From the very beginning, the story of America has been closely linked to economic and financial diplomacy.  Disputes over international trade and commerce were key to our break with Britain.  French and Dutch financing and provisions negotiated by Robert Morris, Benjamin Franklin, and John Adams were critical in maintaining the Continental Army.

George Washington and Treasury Secretary Alexander Hamilton, advocated the negotiation of trade agreements with all nations, arguing that trade links should be established naturally and the role of the government should be limited to ensuring rules of trade and defending the rights of American merchants. While America’s commercial ties to Europe have always been dominant, the drive to the Pacific began way back with the lucrative China trade in the 1780s.

It was President Lincoln’s Secretary of State - William Henry Seward, and his protégé John Hay - that enabled America to become a Pacific power: purchasing Alaska from tsarist Russia, building a transcontinental railway across the Rockies, gaining access to the Pacific by completing the Panama Canal, and acquiring territories in the Pacific.

John Milton Hay served as a special assistant to President Abraham Lincoln followed by several diplomatic posts and, after an appointment as U.S. Ambassador to the United Kingdom; he served for almost seven years (1898-1905) as Secretary of State, under President McKinley and Theodore Roosevelt. Hay was responsible for negotiating the Open Door Policy, which kept China open to trade with all countries on an equal basis with international powers, and negotiated the treaties that cleared the way for the building of the Panama Canal.

William H. Seward had a distinguished political and diplomatic career as Governor of New York, U.S. Senator from New York for two terms, and as Secretary of State from 1861 -1869. Seward skillfully managed the nation's foreign affairs during the Civil War, avoiding any foreign intervention in support of the Confederate States of America.

Seward's priority was making America the indisputable dominant power in the Western hemisphere and then to create a web of commerce, trade and investment binding Asia, America, and Europe. Seward believed not only in territorial expansion but an American  commercial and diplomatic empire. While America’s drive to the Far East began with the Empress of China setting sail for Canton just four months after the Treaty of Paris officially ended the war, it was Seward that initiated a train of events that enabled America to become a Pacific power. Purchasing Alaska as a gateway to Asia from tsarist Russia for $7.2 million, negotiating a commercial reciprocity treaty with Hawaii, building a transcontinental railway across the Rockies, and gaining access to the Pacific by completing the Panama Canal.

Seward had  a particular interest in Asia and believed that it would "become the chief theater of events in the world's great hereafter."

Hay and Seward strove to build a global infrastructure for American commerce and to secure control of maritime bases from which our commercial influence could be projected. Economic diplomacy and statecraft, rather than conflict and conquest, was the preferred strategy. His "commerce over conquest" strategy is captured in his belief that  "the first want of every nation is peace, the last is peace" and his counsel against "any plans or themes of military conquest."

Throughout his distinguished career, Hay and Seward argued and acted to support an energetic economic diplomacy to promote American interests in the Pacific - and that commerce was the key to global influence.  Seward encouraged immigration to the United States, always seeing immigration as a source of strength; and while he was prepared to back up words with arms; he believed that Washington was the natural center for international commerce.

America needs to do it again. 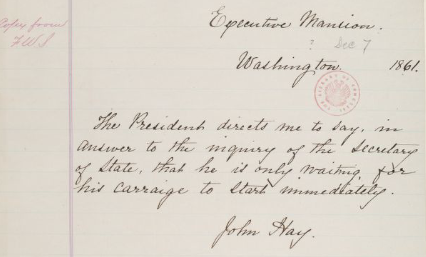